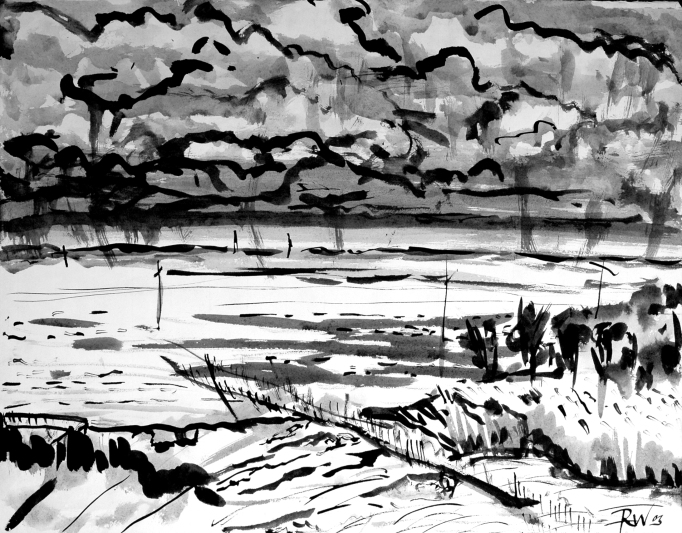 Everyone can draw. It is in the genome. Drawing is one of the earliest things we know about human beings. We admire work they did on cave walls twenty five thousand years ago. Some of it is graceful and refined. Some of it is crude, raw, and expressive. I began drawing at age thirty. Before that, I didn’t think I could draw and I never got the permission or encouragement to try. But I knew about it because of artists in my family and also because of New York City, the center of our cultural life.

I got drawn into the world of drawing and painting as a teenager in a surprising way. I was learning to play folk music on the guitar in the 1960’s and Tom Paxton took my sister on a date to the Museum of Modern Art. Since he was a hero of mine, I wanted to see what it was all about. Over the next many years I spent untold hours looking at the paintings there.

Later, when I started to become serious about photography, an art director from an advertising agency, someone a good bit older than I, suggested that the way to become a good photographer was to study paintings for composition, light, and all the rest of the elements and principles of visual art. I took it to heart. It was another encouragement to study painting. At that point I still had no sense that I might do it myself. In those days painting seemed to be for the girls, at least where I grew up, but photography was ok, kind of macho.

I became a very good black and white photographer and from photography I learned about composition, contrast and the gray scale. When I was thirty I went to graduate school at Rhode Island School of Design and spent three important years there. I was admitted because of my professional background in photography. In those days the curriculum was open, so beyond the required courses in photography, I was free to choose what I wanted to do.

On the first day of school, in the registration line, I was already talking about jumping ship from total concentration in photography. I wanted to paint, to draw. Next to me in line was an impressive-looking, tall classmate, Jenny Holzer, who was just another person at that time and not the major art star she became in the 1980’s. I talked to her about my secret desires while we waited on line to register for classes and she said basically, “If you want to paint, paint!” It was all the permission I needed.

The next day, having no experience whatsoever, I walked into a life drawing class and was welcomed by the teacher H. Lane Smith. “Yes, sure, come in. You are welcome here.” He became a close friend over the next three years and until his death.

I studied the French painters I already knew but now with a different eye because I was actually drawing and painting myself. Matisse, Dufy, and so many others including the Japanese and Chinese ink artists were important to me. But the point I want to make is that those influences did not change me. They did not change me for the simple fact that my crude approach and lack of conventional skill didn’t allow for much of their work to get into my work. My gift was, ironically, that I had no experience or skill in drawing at all. I was totally on my own except for the encouragement of a great teacher and with the unusual hyper-focus, energy, and discipline I have always had.

In class we practiced drawing from the model, and I did more drawing at home, still life, and landscape out on the rocky shores of Narragansett Bay. My teacher, Lane Smith, showed me how to make reed pens from the phragmites growing in the salty marshes. He was a fine painter, a great draftsman, and an excellent calligrapher in the Roman Hand.

My drawings were original and very good right from the beginning. Photography had something to do with that but actually it seemed like a miracle. No matter how awkward my hand was and still is, people could always identify what I was drawing. That is called characterization and I had it in spades and very much in my own unique way. That is what was so interesting, so cool really. I had the energy and the ability to try. Simply put, that was all it took.

The result was almost always exciting in one way or another and not just to me but to my teachers and to many of the students, but not all the students. My art school, RISD, was packed full with kids from all over the world who could draw anything and make it look like a photograph. Some of those students resented the attention I got for my primitive or naïve drawings as they would view them. I could sympathize with them but it didn’t make me doubt what I had. I have never doubted it despite a good deal of destructive criticism in the early years.

My approach to drawing respects the individuality of every human being. In the same way that everyone’s handwriting is different, so should their drawing be different and personal. That is how I think about it. I believe in a person’s sincere attempt to process the world “out there” and I believe that the honesty of that effort will be rewarded in a valuable and interesting result. This is a form of belief but one that is easily verified in the highly prized works of art history from Rembrandt to Dubuffet, from Matisse to Jackson Pollock, from Ingres to Cy Twombly.

Over the course of my teaching career I taught about a thousand students. The ones who were most awkward and seemingly the most hopeless were the ones who progressed much more than those others who were proud and sometimes smug about their conventional drawing skill, which was competent but often boring.

Drawing is totally natural for me. I don’t have to think about it and worry about it the way I do with painting. Painting and poems are both gifts as I see them, something that gets handed to you by your Muse after you struggle, ponder, and experiment with different ideas. The good ones happen mysteriously like that. But drawing is different. For me it is like taking a drink from the well of creativity, touching base with that mysterious power. It is the basic thing, the reliable thing. And the awkward aspect, the unrefined aspect, the mistakes, are all-important. That is a beautiful irony.

Recently, I learned about Wabi-sabi, an aspect of Zen Buddhism in Japan. Wabi-sabi considers imperfection an element of beauty, something to be revealed, not concealed. It suggests that true beauty is imperfect, impermanent, and incomplete. Thinking about Wabi-sabi made me remember a very significant experience I had at a school near Seattle where I was teaching. A gallery owner asked if a famous potter from Japan could use our new ceramics studio for a week to produce a great deal of work. They would pay for all expenses and make a monetary contribution as well. The students could watch. It was a good deal.

I don’t remember his name, the master potter. He was a national treasure and not old either, perhaps early middle age at that time. This was in about 1999. He got busy and over the course of that week, produced countless objects of all kinds, all hand built, nothing from the wheel as I remember. He just made things one after another and they were all considered important because, of course, he was a national treasure, but also because they all had the mark of his personality. That quality was embedded in each piece no matter how humble the object itself might seem to be.

I think about my drawing in this way; that it was a gift right from the start, a gift that I treasured and nurtured. I have gotten better at some things and can sustain my concentration longer but what was good at the beginning is still good. I know if I sit down and look out on creation and respond with ink and pen and brush, if I embrace the fear that always accompanies the first strokes, I will produce something good just like that Japanese artist. It is an ecstatic sense of artistic liberation to reach this point and worth the suffering endured along the way before that liberation is understood and accepted.

It would please me to think that these ideas might help an aspiring artist somewhere.

Ricker Winsor studied American and Russian Literature at Brown University and Painting and Drawing at Rhode Island School of Design where he received an MFA. His new book, The Painting of My Life, was just released by Mud Flat Press; his first book is Pakuwon City, Letters from the East. Both are available on Amazon. His essays and short fiction have been published at “Reflets du Temps” in France and at Empty Mirror Books. Ricker is an artist and writer living in Bali, Indonesia. Visit him at rickerwinsor.com, on Facebook and Twitter.